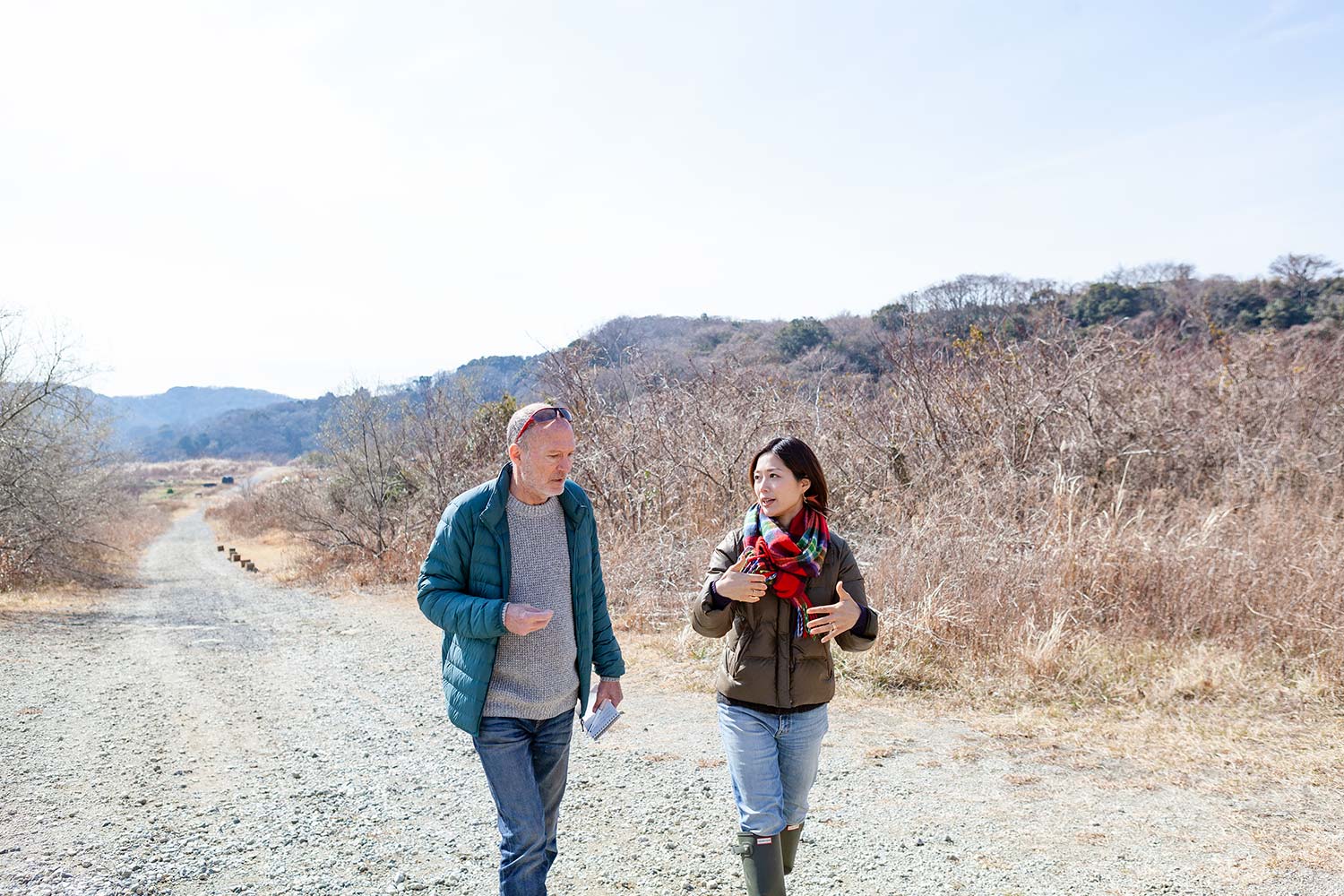 * Scroll down for the English text * 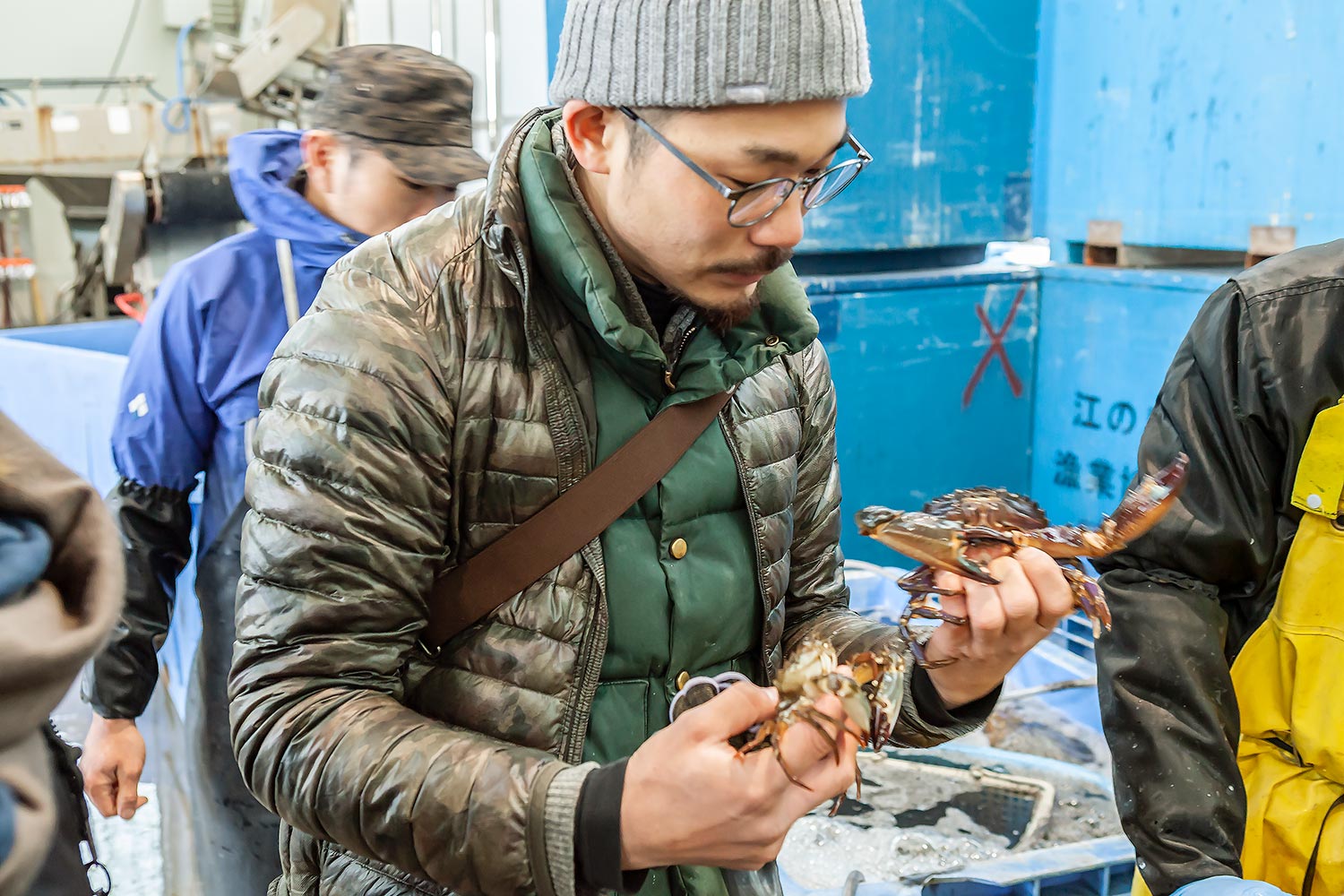 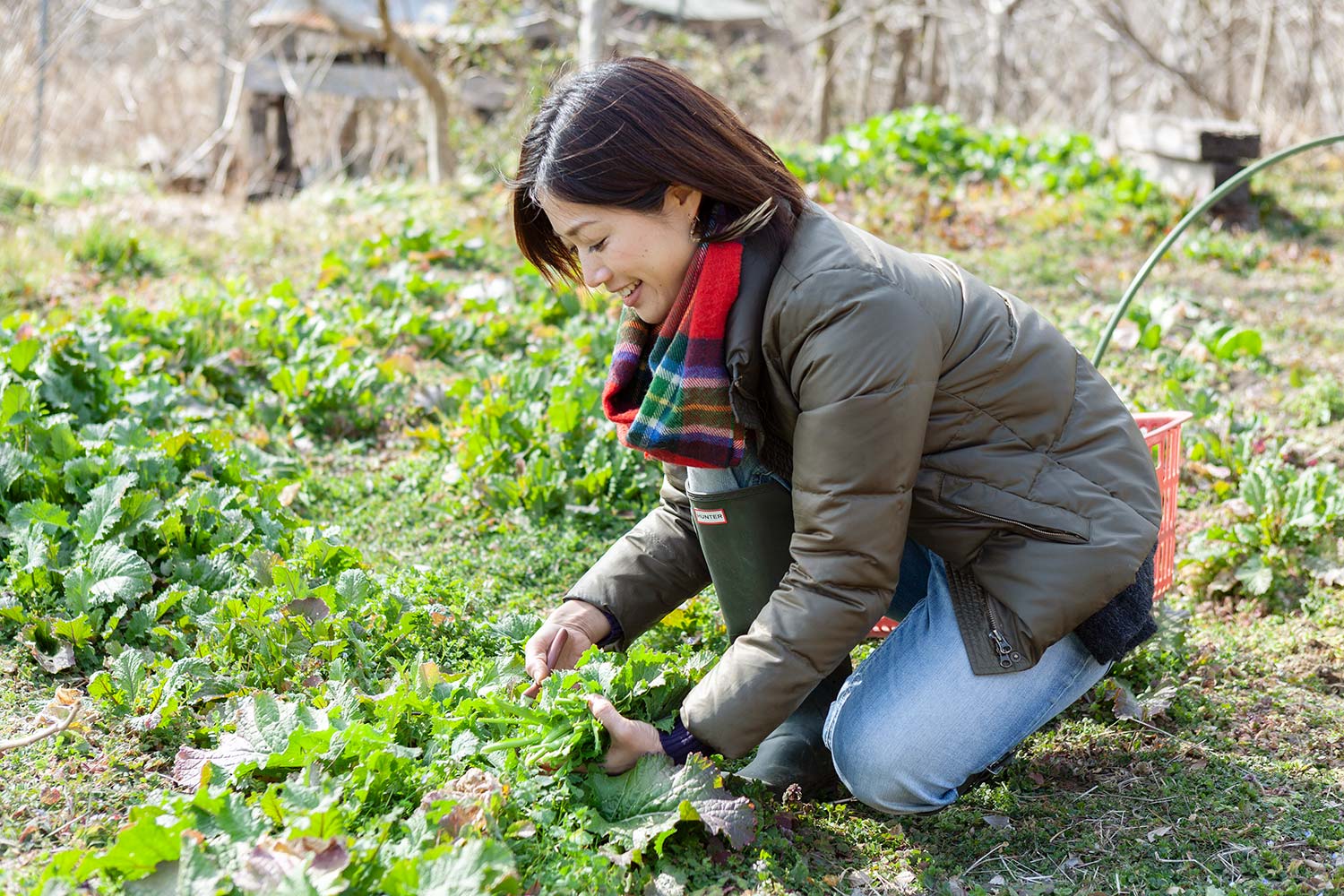 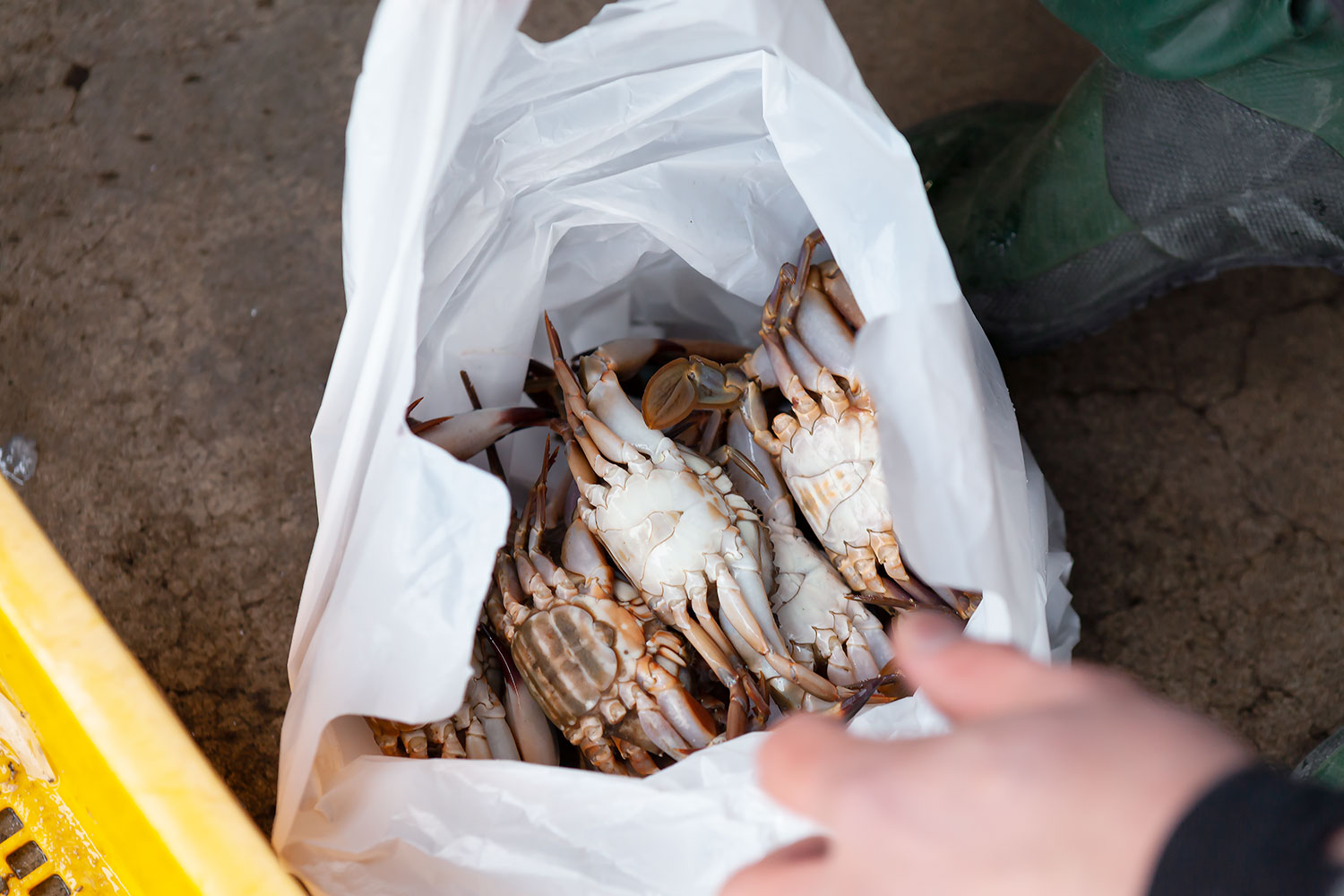 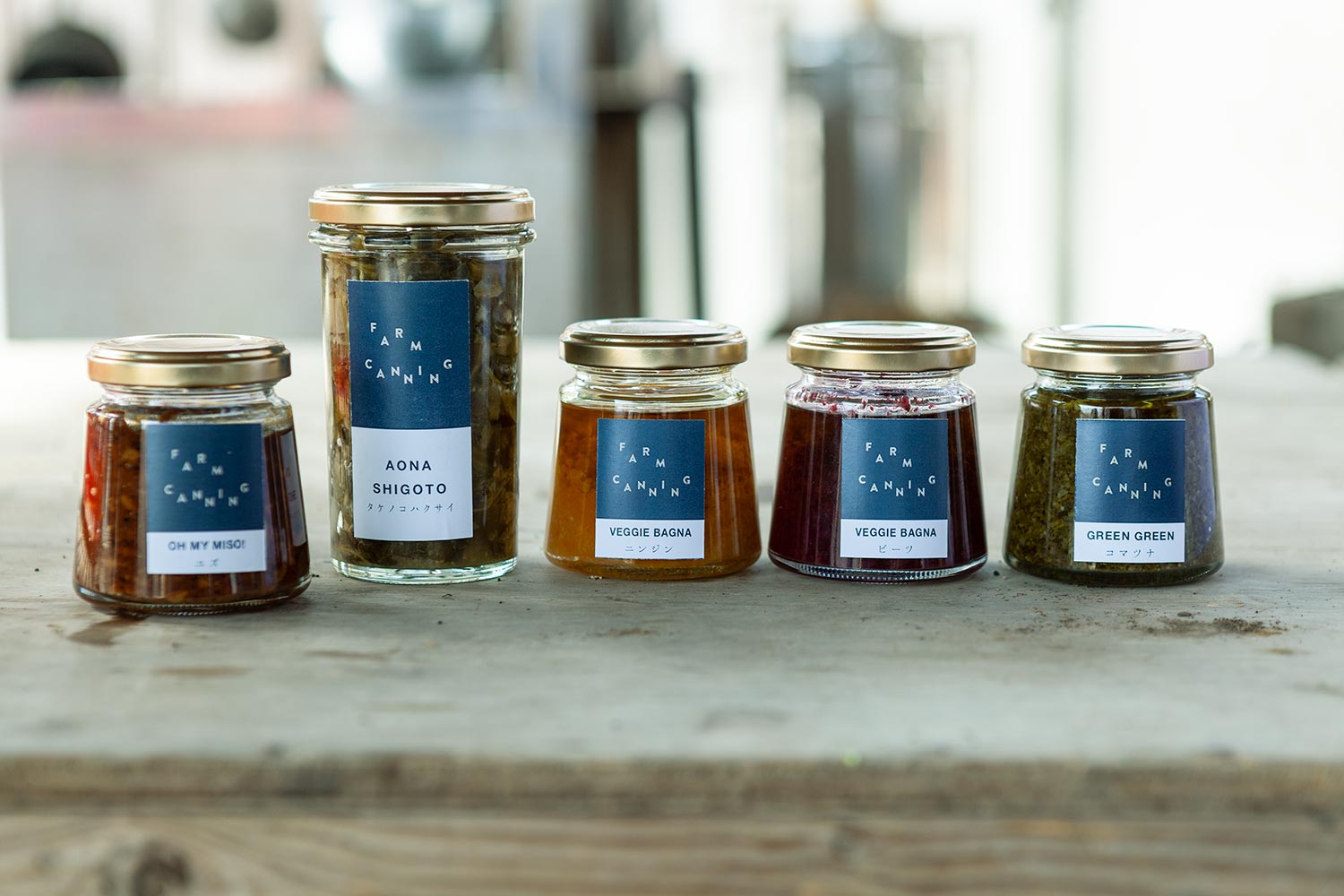 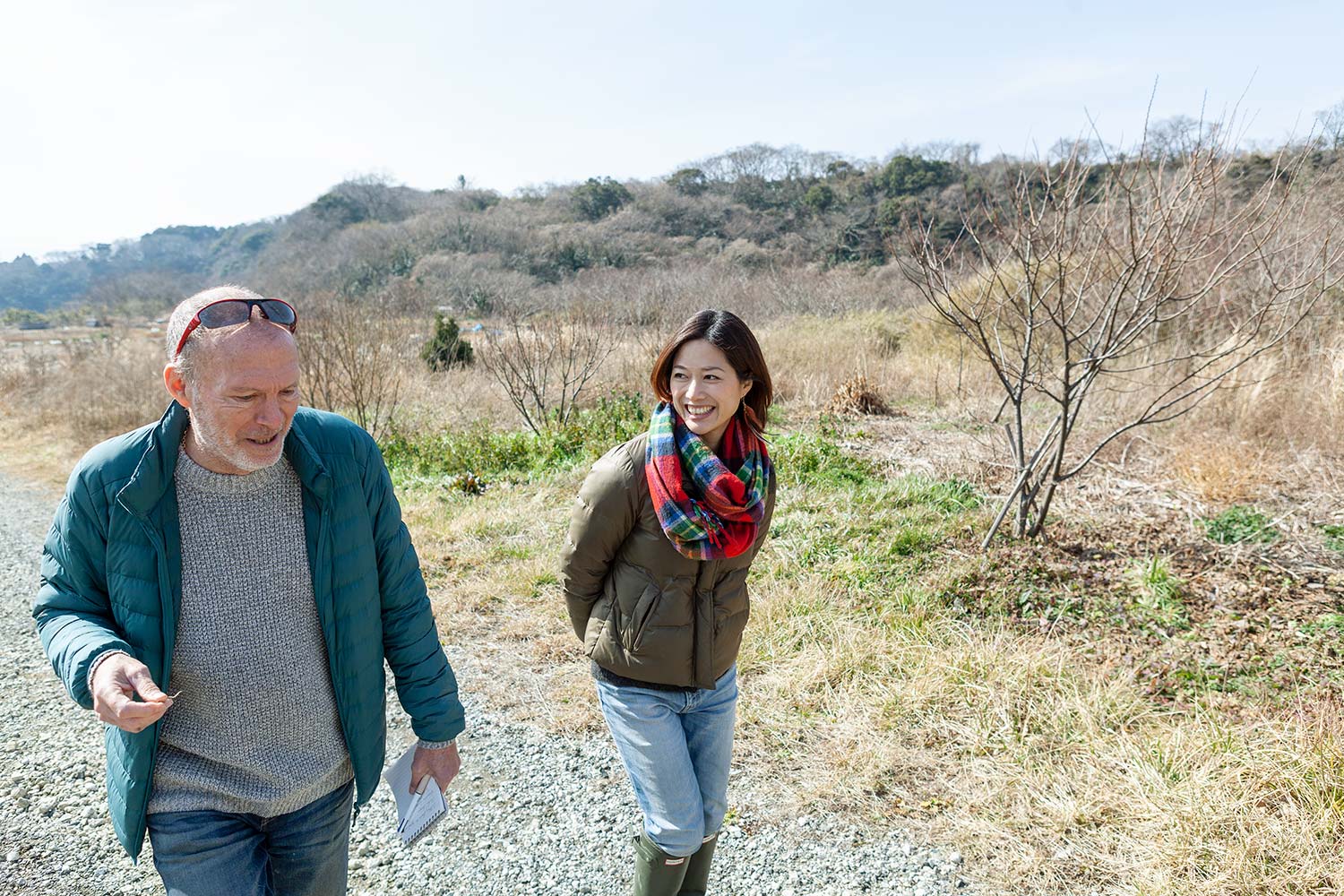 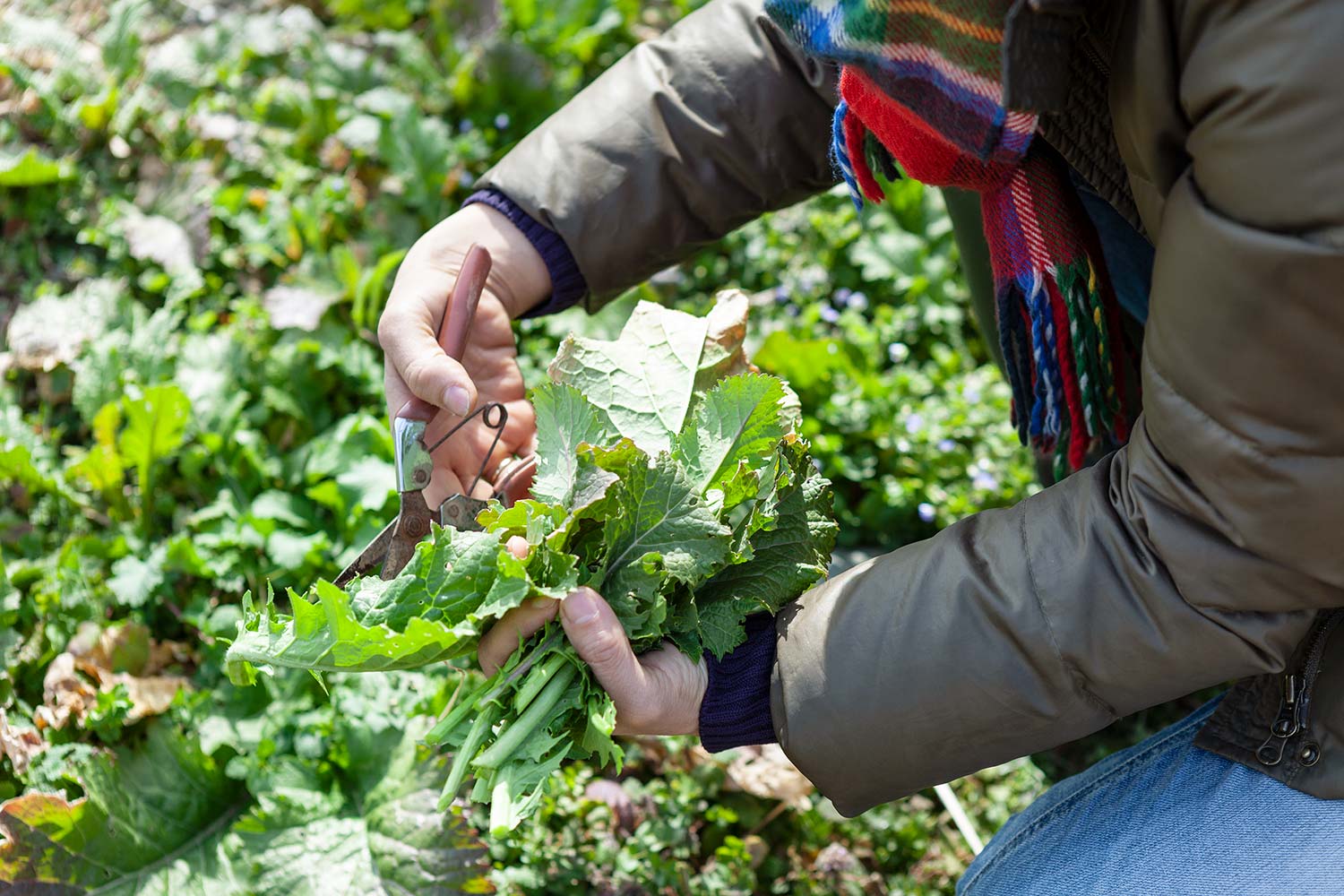 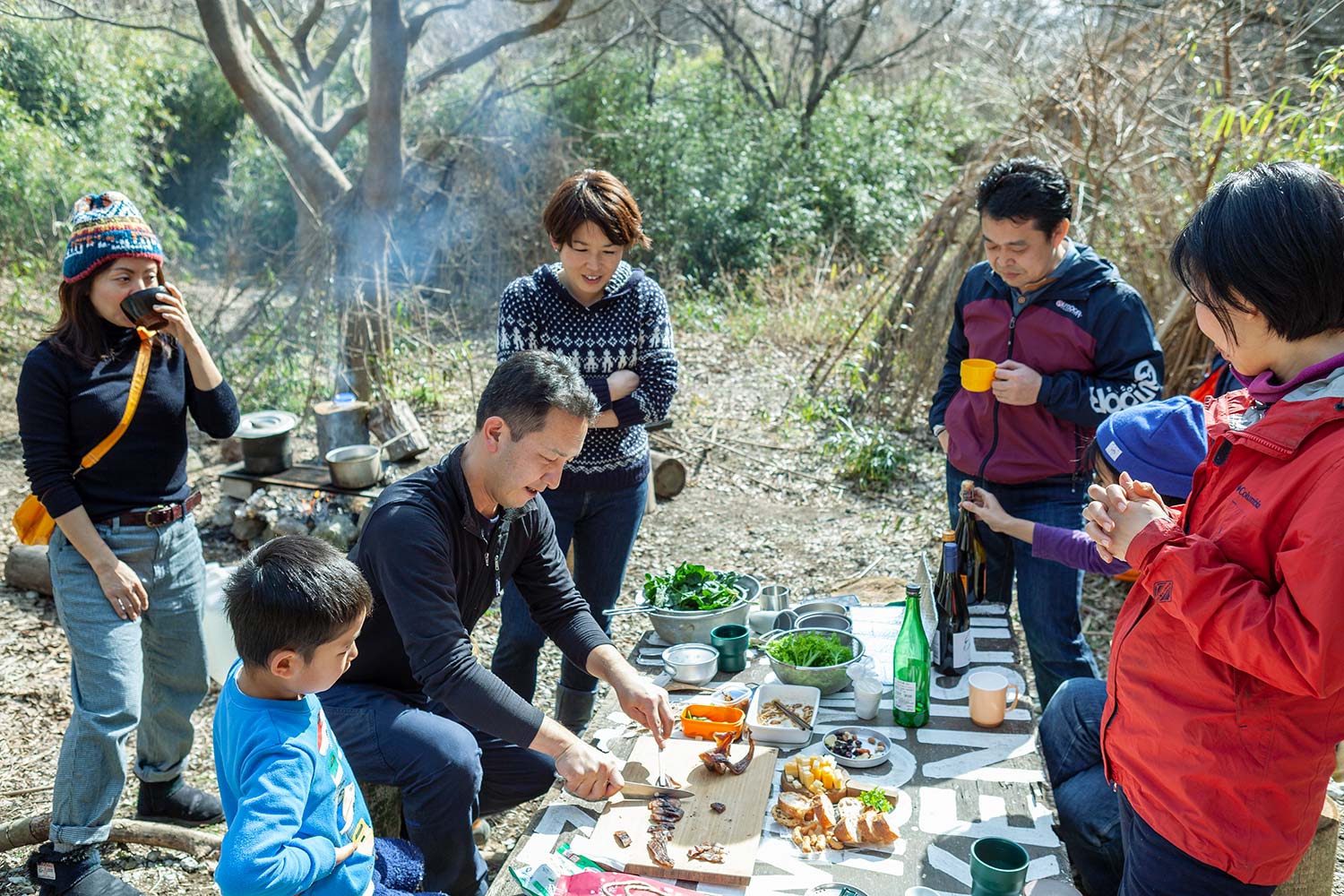 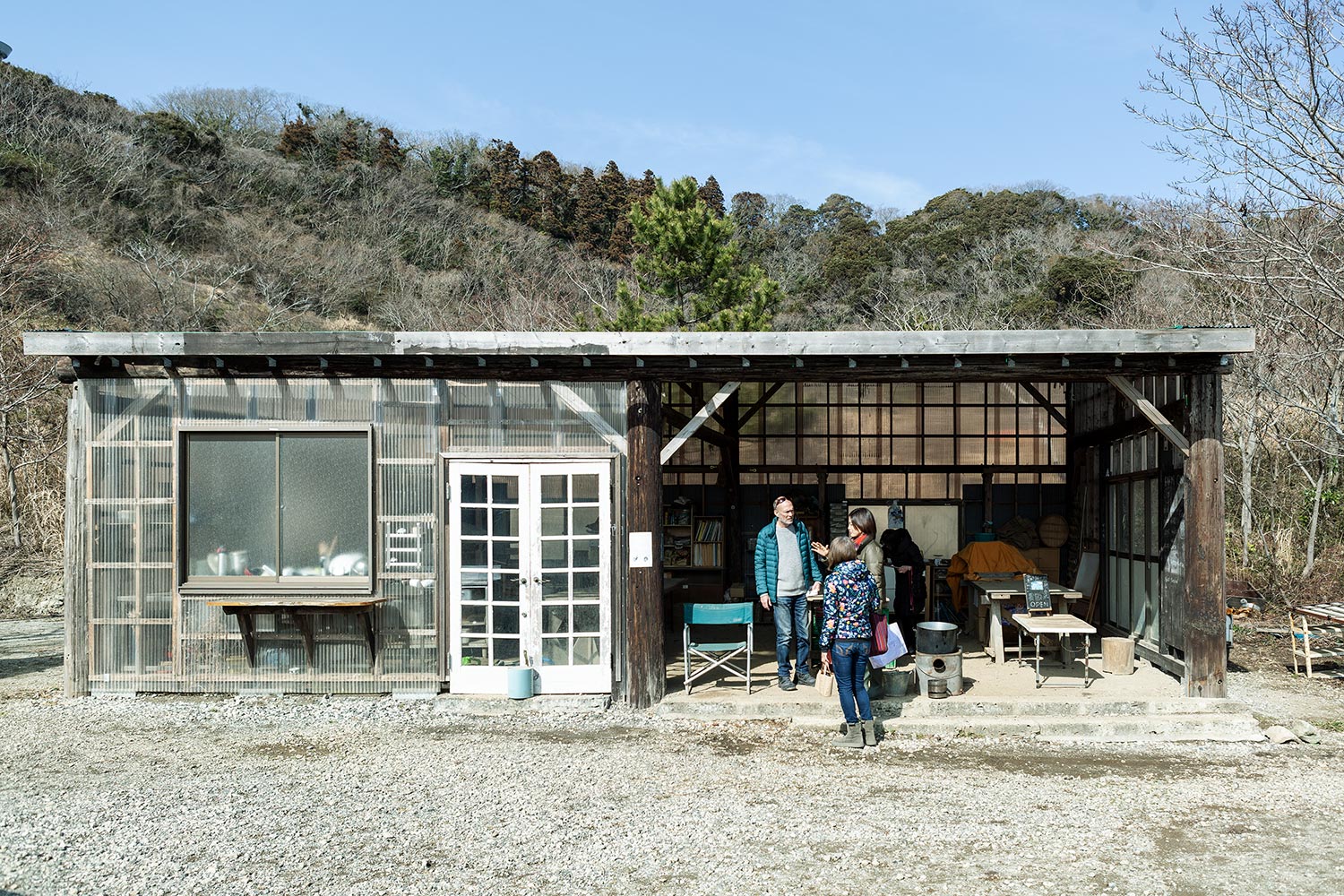 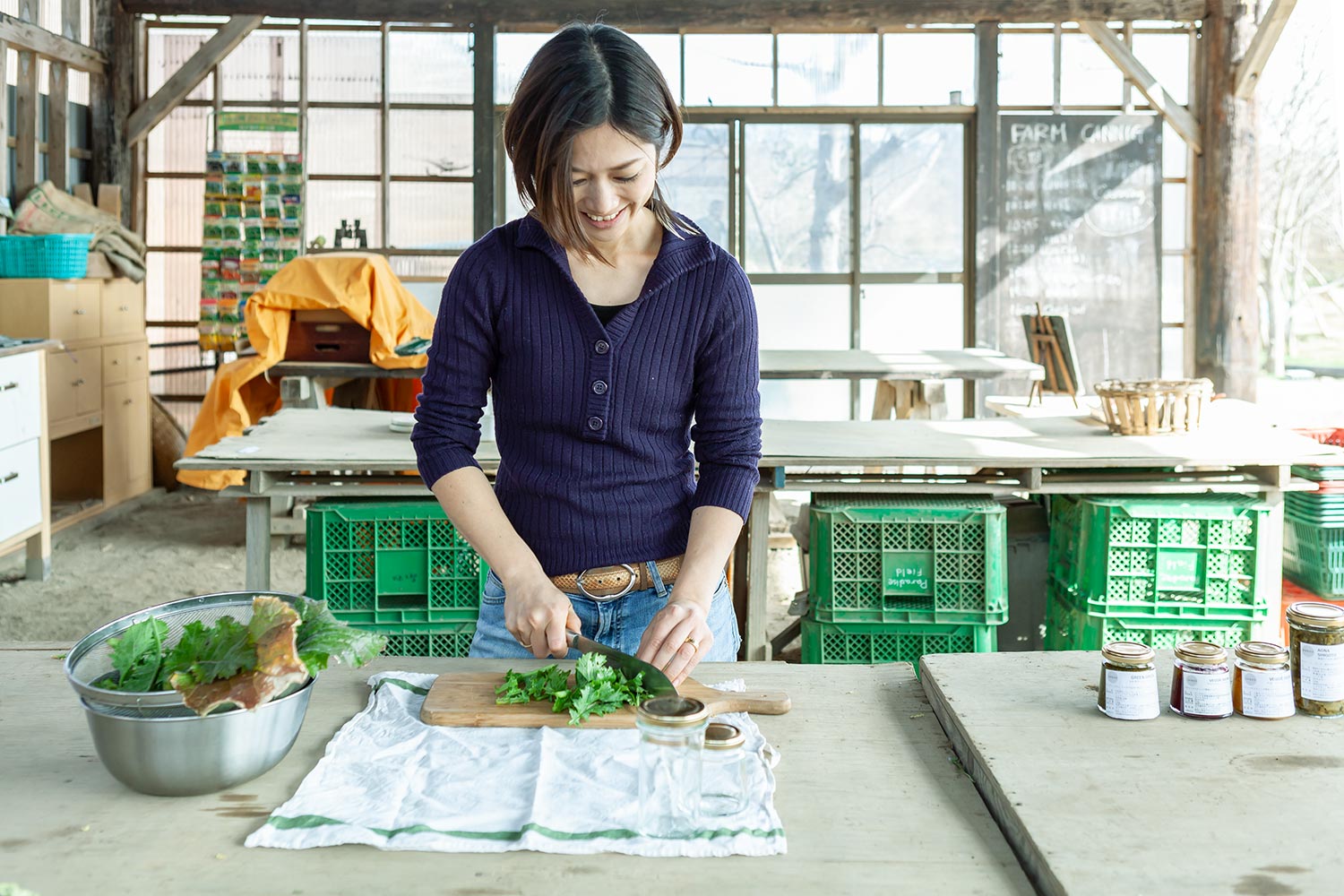 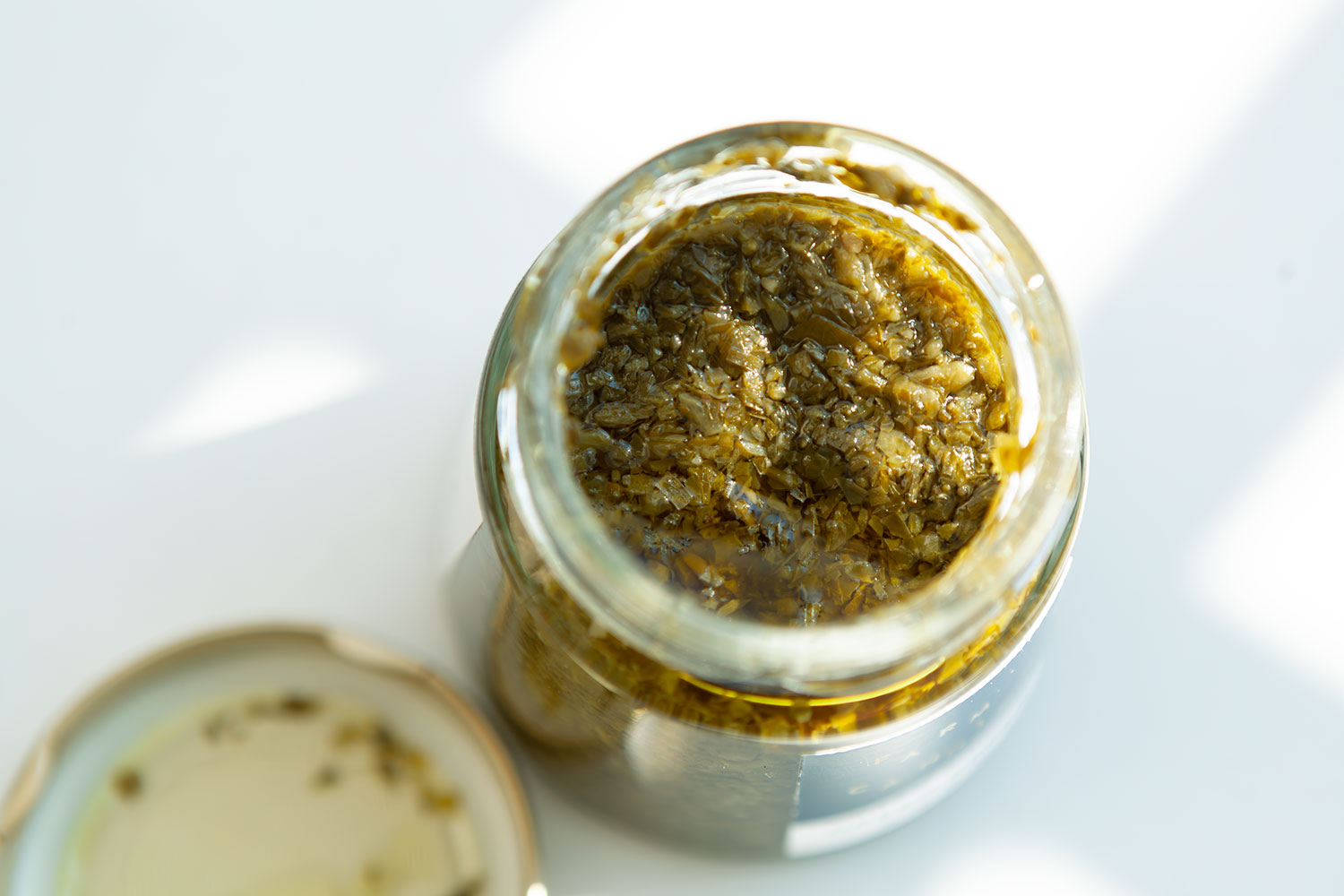 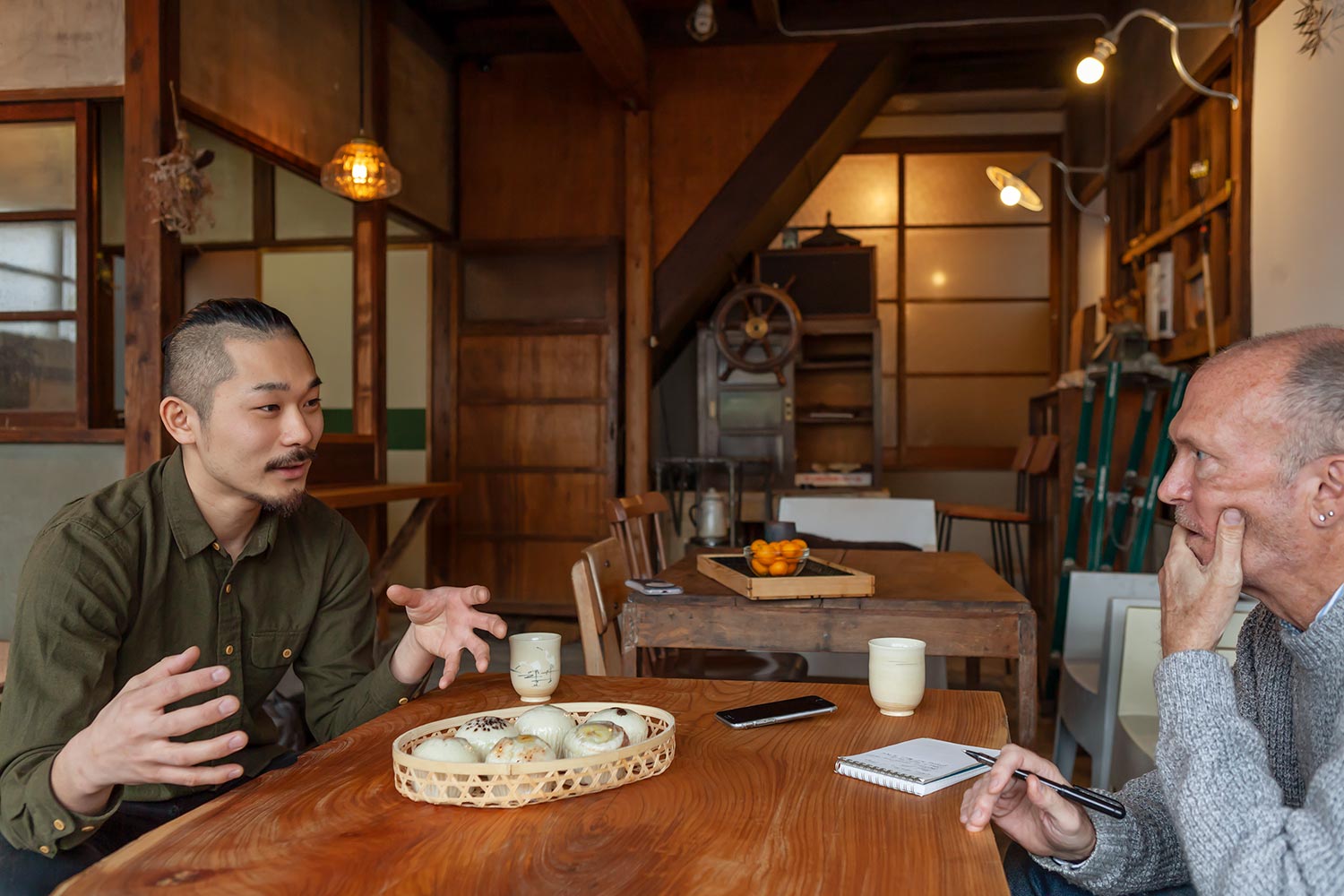 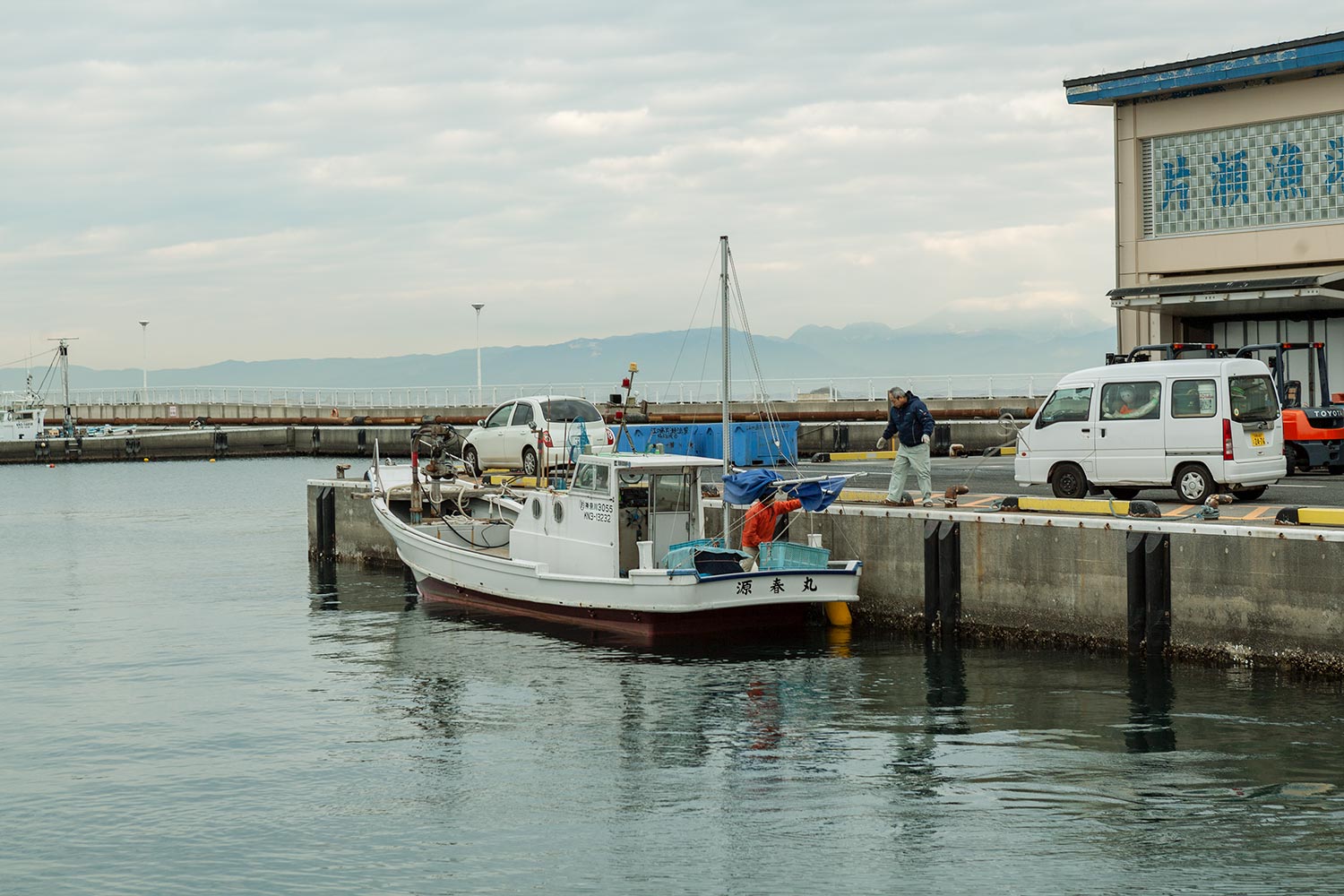 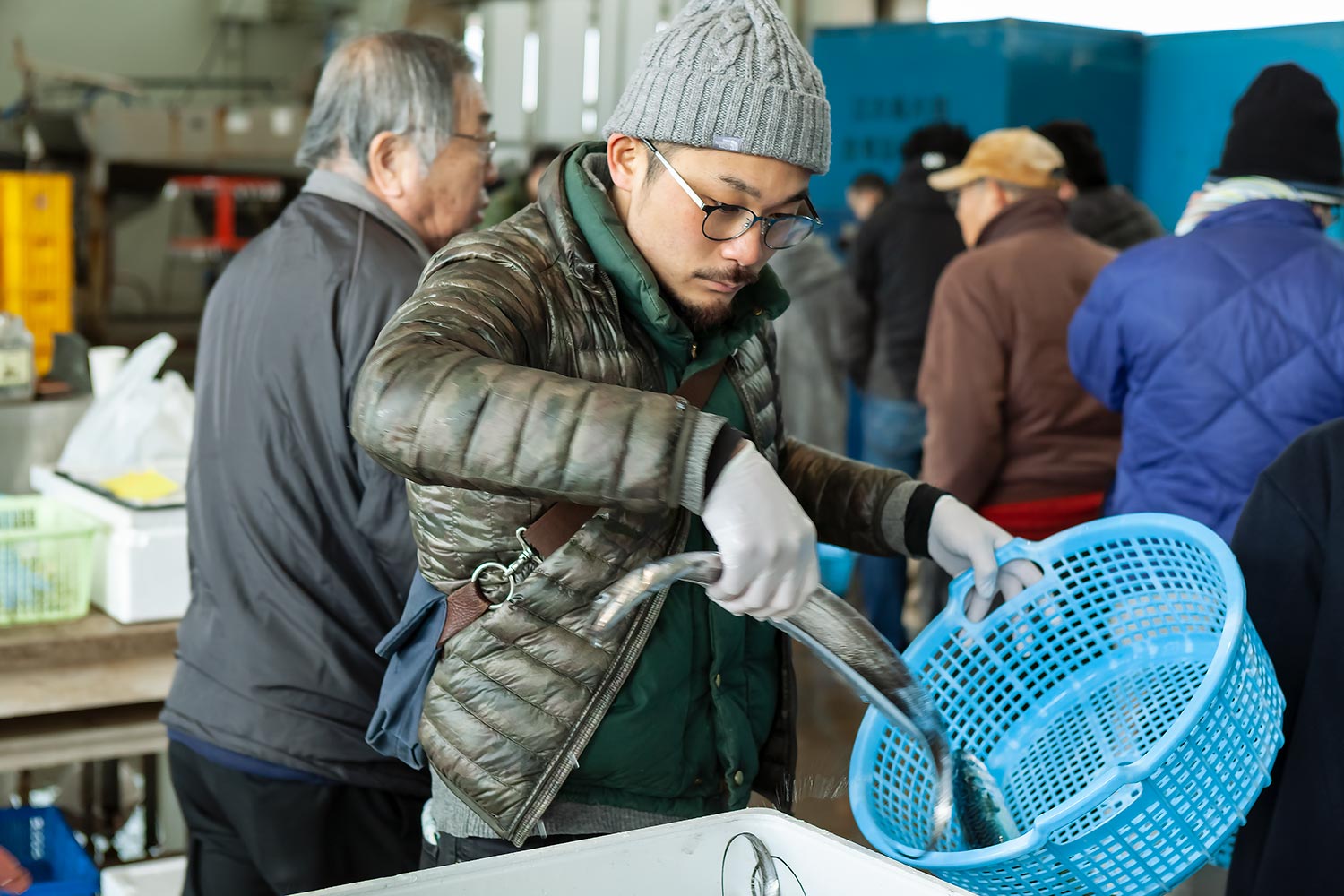 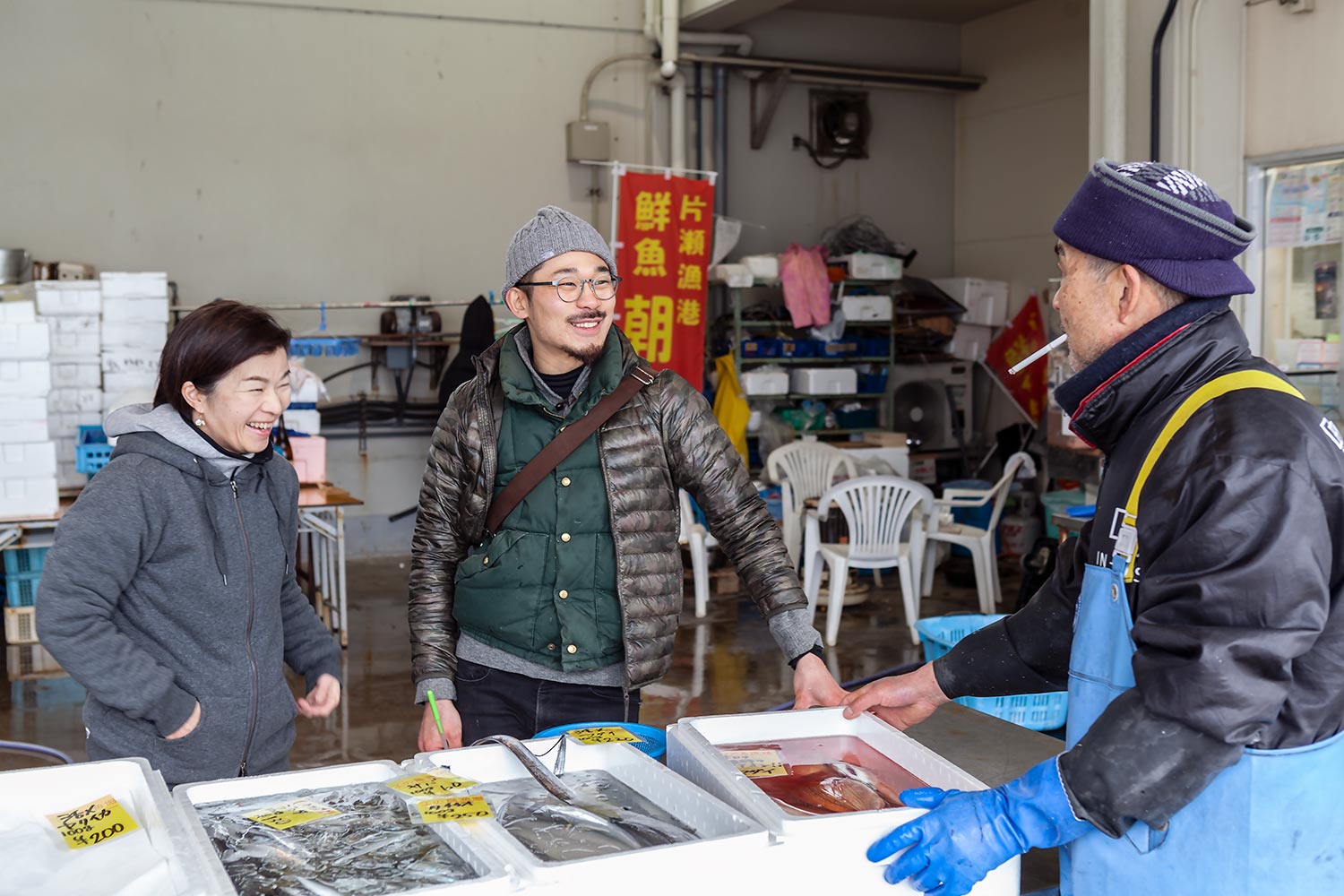 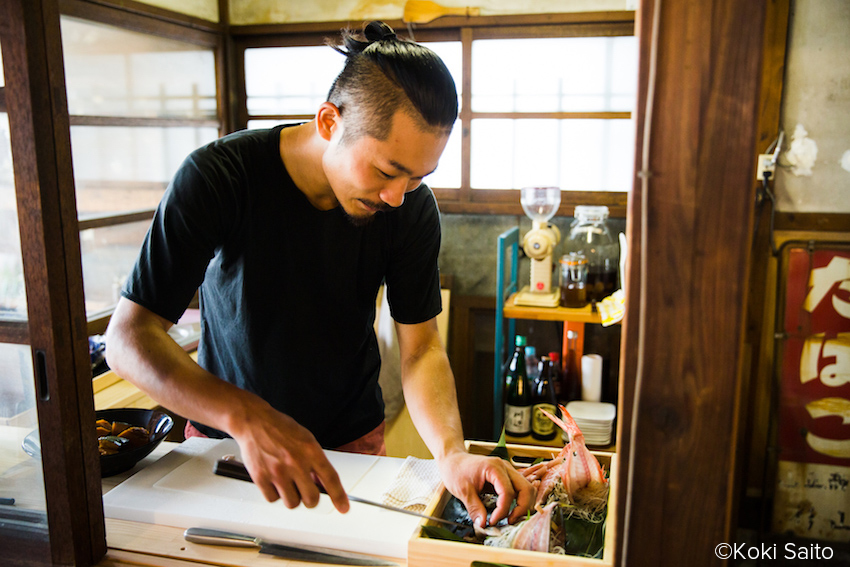 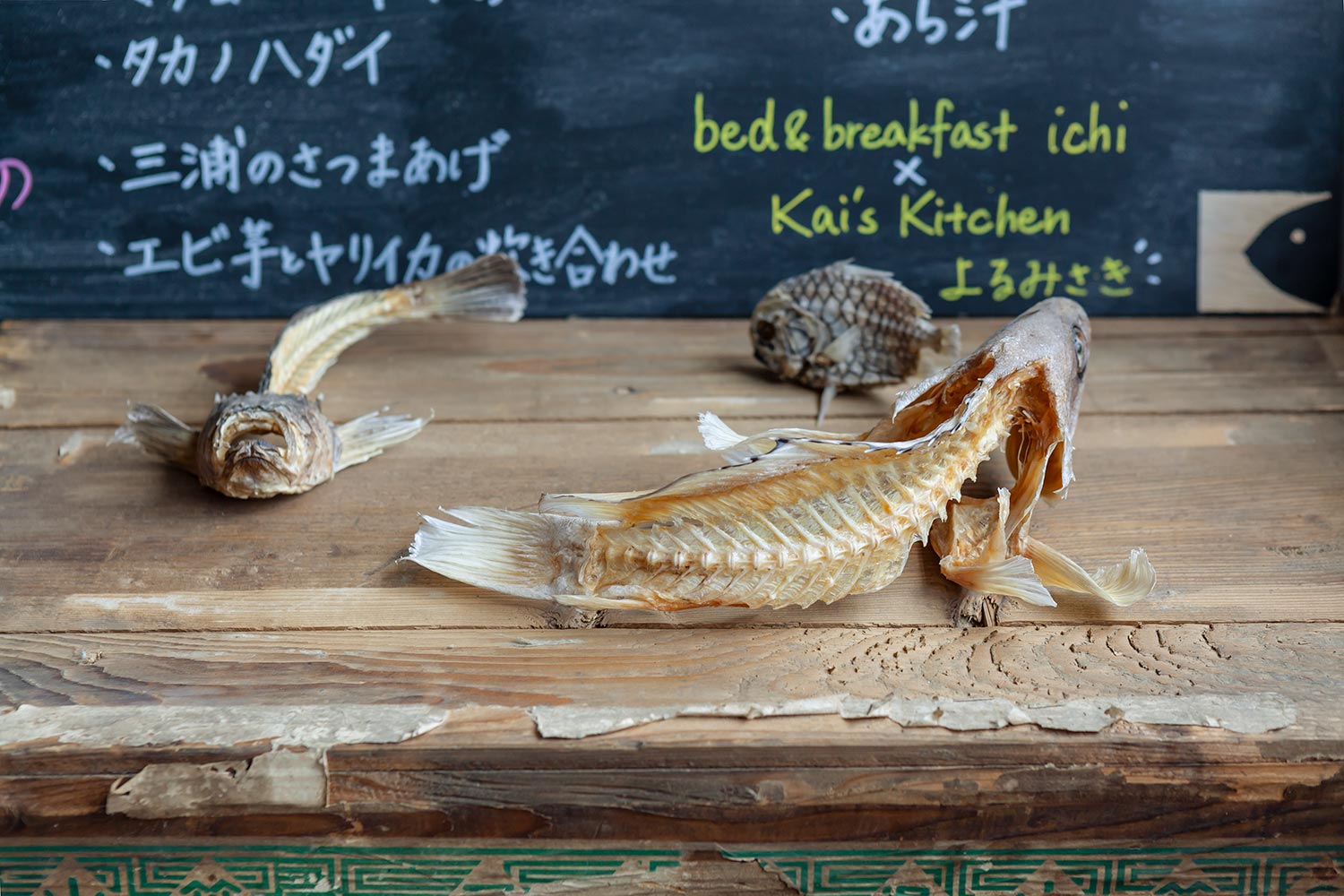 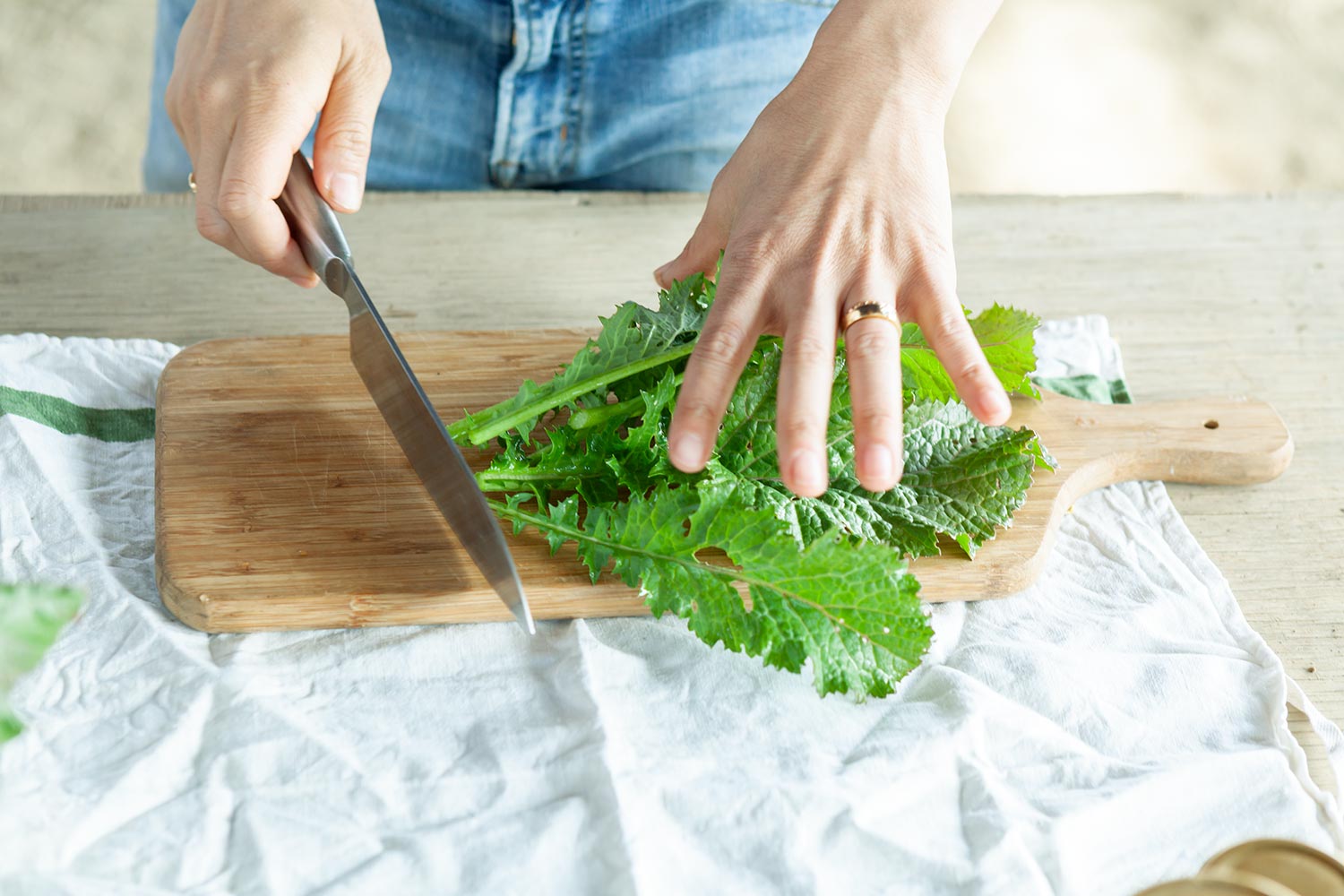 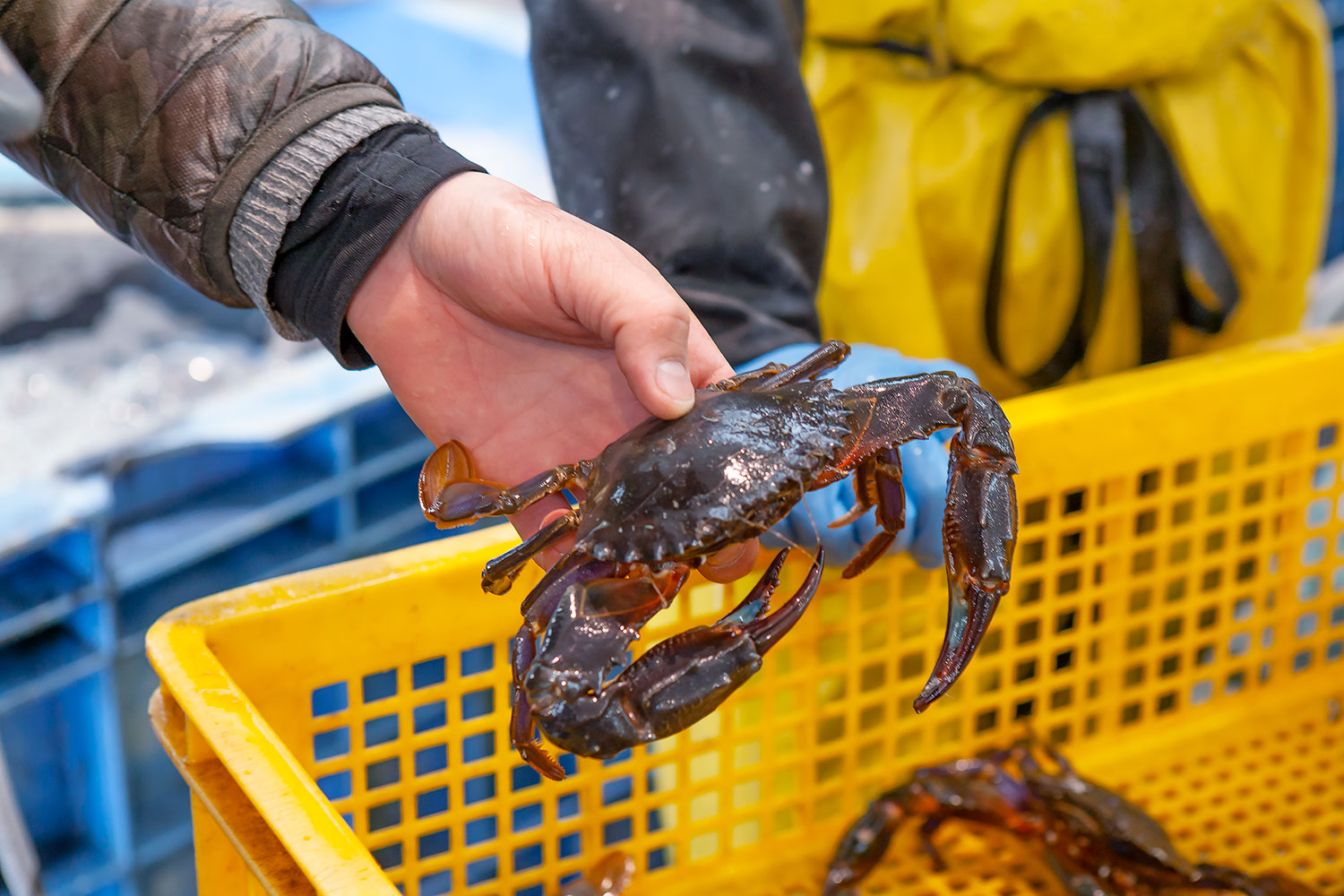 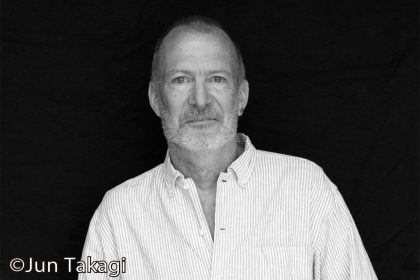 The beautiful world of “ugly” food

ON A BITTER, SNOW-FLURRYING FEBRUARY MORNING, Kai Kosei carries a Styrofoam cooler box to the Katase port fisheries direct sales building. He steps inside and peers into the various tubs and containers where the fishermen have laid out their fresh catch. He’s not completely satisfied with the usual lineup and pokes around until someone pulls out a container and offers the contents free of charge. Inside are five or six dark green-shelled rock crabs that are part of the bycatch. They’re small, not very attractive, and are known for being a bother to cook. No one else looks interested, but Kai seems happy to find something that no one else wants. He adds them to his selection and is already thinking of how he’s going to cook and serve them later, as a Miso Soup.

On a sunny February afternoon a few days later and some 20 kilometers down the coast, Chie Nishimura is cutting leaves from an organic mustard plant growing in a small organic farm plot in a secluded valley near Shonan Kokusai Mura. Their color is rich, their taste is pungent, but because the rows of plants are haphazard and the plants and leaves are all different sizes and quality, they would be categorized as “imperfect food” or b-kyu yasai. She fills a basket with handfuls of the leaves along with assorted other vegetables, all organic, all raised and harvested with personal attention. dIn a short time, these will soon be processed and packed into small glass jars and sold under the brand name of her company, FARM CANNING.

BOTH NISHIMURA AND KAI are part of a growing global movement toward using food that is perfectly edible but often treated as waste. Every year, an estimated 2.9 trillion pounds of food, about a third of all that the world produces, never gets consumed. While a huge portion of it is wasted after it has made its way to markets, restaurants and homes, another large proportion never makes its way beyond the harvest—both farm and sea. At the former fish market at Tokyo’s TSUKIJI, for example, 20,000 tons of totally edible fish were disposed of in 2012.

Groups around the world are fighting back. Sustainably minded kitchen professionals in Europe have hosted “Trash Fish” dinner events to introduce a wider variety of catch to menus. Community supported Agriculture systems, in which people pay for regular access to harvested vegetables, are flourishing in a number of countries, including Japan. And one of the hottest trending start-ups in the US is a company offering delivery of b-kyu vegetables at reduced prices to peoples’ homes.

If you feel an aversion to the term b-kyu vegetables, or would pass up an organically grown but weirdly shaped carrot in favor of a supermarket plastic wrapped and perfectly formed one, Nishimura Chie would like to set you straight. 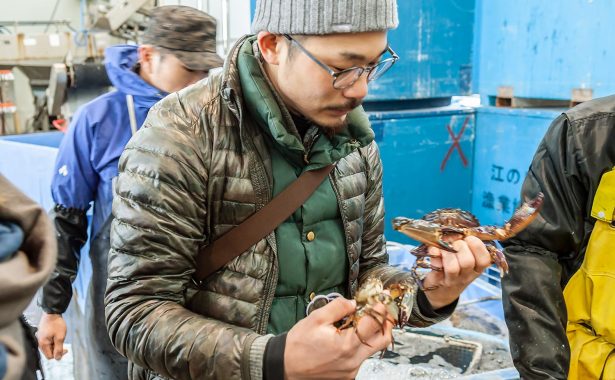 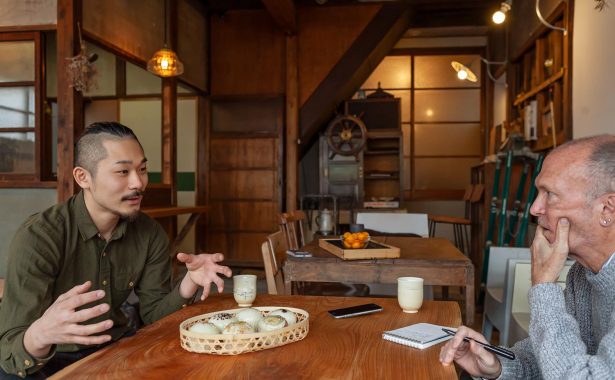 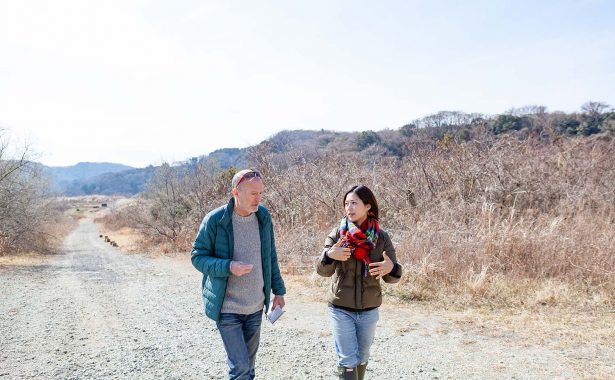 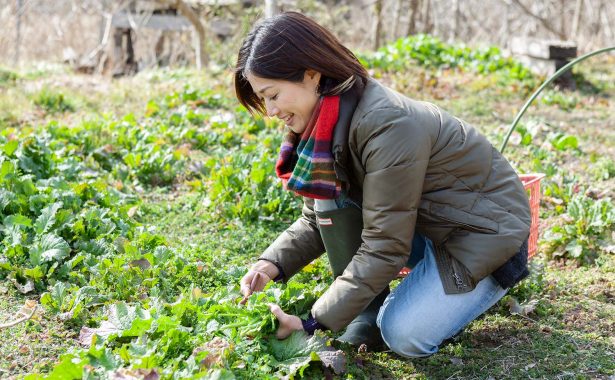 NISHIMURA FOUND HERSELF BEING RUN RAGGED, operating an organic café in Tokyo while beginning a family. Looking for a place where she could develop her dream of having a healthy life in a natural habitat, she moved to the Shonan area with her husband and two small boys. She was disappointed that she still had problems getting her hands on organic food, until she was introduced to Ito Chikara, who was in the process of creating a working farm out of an overgrown valley next to Shonan Village.

She plunged into helping out, the reward being all the vegetables the family could eat from the regular harvest. When challenged to find a way to attract more volunteers, she came up with the idea for the “Forest and Farm School,” a one-year program that has attracted attendees from as far as Chiba and Saitama. “I used my own dream as a model,” she says. “I thought a lot of people must feel like me: wanting to live relaxed, more organically, harvesting your own food and enjoying natural surroundings with your children.” The course is easy-going, with once a month sessions that include field work and lessons in canning. It also includes a monthly delivery of vegetables for participants to can at home. (A new class year will begin in May.)

Nishimura’s FARM CANNING has also expanded into retail sales. Besides what is produced on the farm, she has convinced a number of other farmers to sell their b-kyu produce which she then cans for sale at a number of outlets, including supermarkets, café delis and an online store. “Some farmers are embarrassed to admit they have b-kyu vegetables, so we have to convince them it’s okay,” she says. FARM CANNING now produces some 300 to 400 bottles a month, staying away from typical things like jam and pickles and focusing on useful items that busy people can add to spice up meals at home.

But she says there’s nothing equal to eating something you’ve harvested and canned yourself. “As you open the lid, you might even remember the fact that it was raining when you picked the ingredients,” she says. “So it’s like canning memories.”
KAI, WHO HAILS FROM KUMAMOTO, HAS AN UNUSUAL APPROACH WITH FISH. Ever since his two years in a Tokyo restaurant, where one fish dealer would bring unusual types of fish from all over Japan, he’s been fascinated with the kinds of fish that don’t usually make it onto restaurant menus and how to cook them. Now he’s become an apostle for Unusable fish. These are often referred to by unflattering names, like “trash fish” or “ugly fish” and unused for a number of reasons. Maybe they’re too small or too big to fit in the standard containers with others of the same kind. Maybe they’re only tasty at certain times of year. Maybe they’re just unknown by the general public.

After leaving Tokyo for Ninomiya, Kai began hanging out at fish markets, keeping his ears open. “I started to get known as someone looking for odd and unusual fish, and I’d get asked how I cooked them,” he says. “Then they’d tell me about other unpopular fish that were also good, depending on how they were used.” Kai and his wife, Yuka, live in a former peanut wholesaler’s quarters, which they are in the process of reforming into a minpaku and small restaurant/café. He roams up and down the Shonan coast and all the way to Misaki, giving cooking workshops with a focus on how to prepare local unwanted fish.

“I cooked bora at a recent event in Misaki,” he says. “It has a bad image, but I served it as simple sashimi, and everyone thought it was delicious.” He has other suggestions: Kamasu “I was surprised at its fattiness.” Utsubo: “A lot of collagen, and it’s good as tataki or fried,” ei livers: “Just like fois gras.” He’s also working with the Yokohama Fish Market, in discussions on how to widen the market for unused fish. While not as huge as the Tokyo Fish Market at Toyosu, it’s one of Japan’s top five, and an event held there can have an impact. He calls himself an interpreter, an intermediary between fishermen and the public, and it’s clear that Kai is on a mission to spread the word about using all the resources of the sea.

IT WAS GREAT TO FIND TWO PEOPLE who are doing such similar things, and while they are now operating on a small scale, their enthusiasm and curiosity surely mark them as people that are having an impact on those they come in contact with. It’s also fascinating to find people who have come to Shonan with their aspirations and hopes to change lives.

For all the talk of "Mottainai", waste is still a huge part of our lives, as anyone who has walked the beaches of Shonan can attest. And while plastic waste has rightfully garnered huge attention recently, the way our society throws away perfectly edible resources also has a tremendous impact on the environment.

We Shonan residents are blessed by our location by the sea and its bounty, by the moderate climate and the many fields where growing is easy. So we should be especially careful with our resources, and look for areas we can lead in making the best use of them.

Having a broader range of fish to harvest and using imperfect, b-kyu vegetables is good for everyone. It’s more profitable in the end for fishermen and farmers, meaning they can sell more of their harvest. It allows them to respond to changes in the ecosystems—letting fishermen harvest whatever is abundant in their area at the time and farmers to evolve with climate changes. Expanding the varieties of fish diffuses demand, and gives depleted stocks of more popular varieties a chance to recover.

So here’s the third instalment of the Shonan Code:

SHONAN CODE no.3
“Find ways to minimise food waste that will support the maintenance of our natural resources from the sea and soil”.

And here’s some ways to start:
✔︎ Start a community garden
✔︎ Join a community supported agriculture program
✔︎ Buy directly from fisheries
✔︎ Buy directly from agricultural outlets, like farmers markets or road-side stands
✔︎ Talk to the fish mongers and fishermen about what’s fresh and how to cook certain fish
✔︎ Learn to prepare vegetables and fish in ways that produce little waste 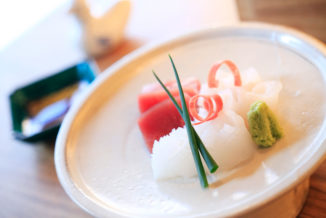 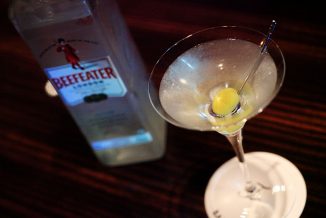 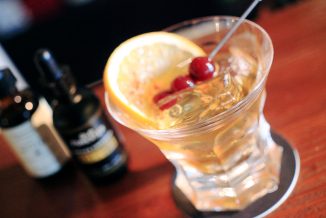 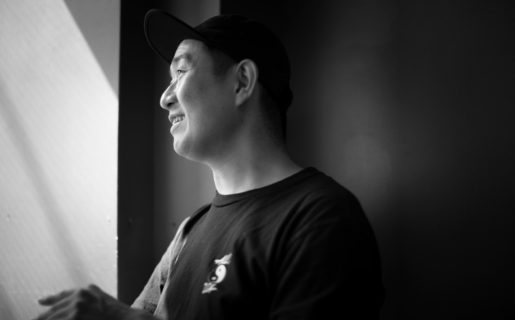 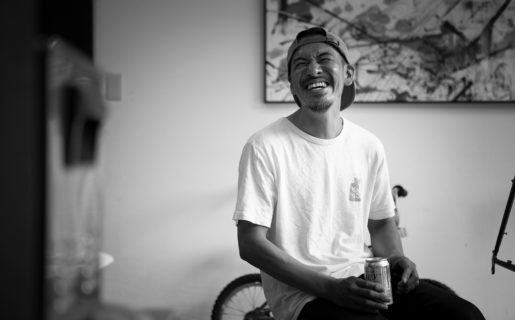